I don’t care what Merriam-Webster’s dictionary says, “gift” is not a verb. When I hear someone talk about gifting something, I want nothing more than to make them a gift of The Elements of Style and smack them upside the head with it.

I recently discovered that while I have been defending the world against the scourge of nouns-as-verbs, they have quietly made their way into the dictionary. I refuse to acknowledge or acquiesce to such barbarism. In the spirit of the times, I am declaring:

I vow to preach the gospel of #neveraverb as long as I have breath. In the words of Martin Luther, patron saint of resisters, “Here I stand. I cannot do otherwise.”

At the heart of my resistance — of all resistance — is the belief that I know better than The Authority I’m resisting. My defiance denies the authority’s moral, legal, academic or spiritual legitimacy in favor of my own. Now, resistance can be a principled, brave opposition to an obvious wrong. (Think Dietrich Bonhoeffer, William Wilberforce or Martin Luther KIng, Jr.) It can also be petulant, obstinate and self-aggrandizing, like my linguistic jihad against verbified nouns.

If it were only a matter of grammar, I could chalk it up to a charming quirk. But I fear this rebellious streak goes far beyond the Word Wars.

If resistance is substituting my own judgment for an authority’s then I am guilty of resisting God. You probably are, too. It’s OK, we come by it honestly. We inherited it from Adam and Eve.

“So when the woman saw that the tree was good for food, and that it was a delight to the eyes, and that the tree was to be desired to make one wise, she took of its fruit and ate, and she also gave some to her husband who was with her, and he ate.” (Genesis 3:6)

In other words, God said “No”, but I know better.

She knows God has prohibited it; she says as much to the serpent. But she rationalizes her rebellion. It looks good, it probably tastes good. It will make me wise, and what could be wrong with that? Why wouldn’t a loving God want me to have it?” (By the way, I think this last is one of the most dangerous questions we can ask. For one thing, it assumes that if God loves us, He will give us our every desire, even if that contradicts His will and His word. For another, it often precedes an argument that ends in “I know that’s what He said, but He didn’t mean it that way.”)

Eve and Adam’s rebellion — and ours — is rooted in the desire to be the judge of what is good and what is not. Their desire has convinced them that they can ask God to scooch over so they can share His throne.

This is why our resistance hero Martin Luther famously wrote that the root of all sin is idolatry. We never break any commandment without having first broken the first: “You shall have no other gods before me.” After all, once that is abrogated, then the absolute moral authority that undergirds the rest of the commandments becomes just another voice in the din of relativism. And all the while we pile up one rationalization after another for why this is all perfectly fine and God is cool with it.

From that day in the garden to this day at my desk, people have struggled with the radical claim on our hearts and our heads of that first commandment.

When it comes to words, I cling to the notion that I know better than the dictionary. I suppose there is no real harm to this, unless you happen to be on the receiving end of one of my tirades.

But when it comes to God, my resistance reveals a dangerous idolatry.

In the gospel of Luke, Jesus asks a haunting question: 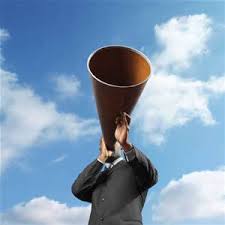 I’m a light sleeper. I’m constantly on the qui vive for intruders and middle-of-the-night phone calls announcing catastrophe. Earplugs make me blissfully unaware of my surroundings and allow me to sleep through the night. Those little balls of wax are a blessing to my physical and mental health.

Of course, insulation from reality can also be dangerous. Sometimes the very things we want to screen out are the things we are in most need of hearing. I don’t need to hear noises that will disrupt my sleep. But God is so sure I need to hear some hard truths about myself that He will shout until I hear His voice.

I’m reading Isaiah Chapter 58 every day during Lent. This past week, I’ve found myself lingering on the first verse:

“Cry aloud; do not hold back;
lift up your voice like a trumpet;
declare to my people their transgression,
to the house of Jacob their sins.”

Before He begins His litany of the people’s sin, God warns Isaiah he’s going to have to break through the self-righteous, self-satisfied, self-pitying bubble they’ve constructed. He’s saying, “You know all the stuff these people don’t want to hear? You’re going to shout it at the top of your lungs! All their dirty little secrets? You’re going to blare it over a loudspeaker to get their attention!”

Isaiah 58 is withering indictment of the people’s hypocrisy. Their lips pray to God one minute and quarrel the next. Their fasting is more concerned with appearances than with true humility. They worship and praise the Creator while they mistreat His creation. And as if that isn’t bad enough, they have the effrontery of accusing God of ignoring their piety and not hearing their prayers.

“Why have we fasted, and you see it not?
Why have we humbled ourselves, and you take no knowledge of it?” (Isaiah 58:3)

The irony is too delicious.

They are so busy whining that God isn’t listening, they don’t see that they are the deaf ones.

They are all too happy to hold God to His promise of hearing their prayers, yet conveniently plug up their ears to His demands for justice, love and compassion. And so, God tells Isaiah to shout. He knows that there comes a time when gentle rebukes must give way to full-throated cries; when niceties and euphemisms must be abandoned.

He knows that nothing less than a blunt, blaring truth will penetrate our willful deafness.

God’s salvation story is punctuated with God having to turn up the volume so we will hear Him:

And so on throughout God’s encounters with his stiff-necked people. Until finally, God sends Jesus, a walking, talking, healing, sacrificing Holy Bullhorn to call us to to repentance, to salvation, to reconciliation with God. His life, death and resurrection are God’s greatest — and loudest — proclamation to the world.

Throughout the gospels, Jesus says, “He who has ears to hear, let him hear.” The fact of having ears apparently isn’t enough to guarantee hearing. There needs to be a submission, a willingness, an active decision to hear with the ears we have been given. Sometimes this means pulling out the ear plugs that allow us to sleep in blissful ignorance of our failure to love and serve as God intends. And when we don’t, we can count on God to make enough noise to pierce our deafness.

My prayer for this Lent:

Lord, I do not want to make you shout.
I want to hear what you have to say to me, even if it is hard.  I confess my my obstinacy and my self-righteousness and trust that you will forgive me.
Lord, give me ears to hear.
Amen. 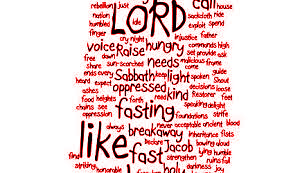 My inspiration for this Lent’s spiritual practice came from Twitter. There, among the streams of the sublime and the ridiculous, came this challenge from Lynne Hybels:

“Years ago a friend said that if I read Isaiah 58 for 30 days in a row, it would turn my life upside-down. I did. She was right. Try it.”

This seemed particularly appropriate for Lent, a time devoted to self-examination, penitence and fasting. Lenten fasting isn’t only about fasting from food, although that can be an important discipline. Fasting can be any intentional abstinence — from television, from gossiping, from social media. In Celebration of Discipline, Richard Foster says, “Fasting reveals what controls us.” I have certainly found this to be true. It is not until you try to do without something that you realize the hold it has on you and what deeper needs it masks. I never thought of myself as particularly tethered to my phone until I decided to abstain from electronic communication on the Sabbath. Talk about Fear of Missing Out!

But fasting isn’t only about what we give up; it is about what we can gain. Throughout Scripture, fasting is a way to draw near to God, to hear his voice, to know his will. Isaiah 58 will be my perfect companion this Lent. It challenges me to see the kind of fasting God honors. It shows me the true path to God’s blessing. It brings me to the headwaters of holiness.

I’m going to read Isaiah 58 every day this Lent and see where it leads me. Will you join me?