Or, Why I Stopped Being Such a Good Hostess 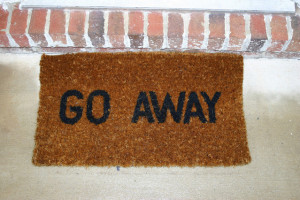 One Sunday I stood in the back of an empty sanctuary. I was the “substitute preacher” that day, and was taking a few moments to center myself before worship began. I closed my eyes and began to shake my head emphatically from side to side. My husband asked, with some alarm, “Are you all right?”

“I’m shaking off the sign,” I said, as if I was a pitcher who didn’t want to throw the fastball. Not only didn’t this clarify anything for him, it made him even more concerned for my sanity, so I told him about The Thoughts.

Sometimes, right before I preached, I would start thinking, “What makes me think I can do this? I’m not holy enough, not learned enough, haven’t been a Christian long enough. It wasn’t that long ago I was the person who mocked believers, who scoffed at the very notion of God. It’s pretty cheeky of me to think I have any business being in the pulpit. Who do I think I am, anyway?”

With shaken confidence I would preach anyway — after all, what choice did I have? But once I began, I remembered that it wasn’t my worthiness that consecrated the words; the Word consecrated me. Once I began, I would feel the joy that I always did, the feeling that this is exactly where I should be. Still, the next time, The Thoughts showed up on cue.

I got tired of the sniping, snarky, soul-sucking voice of Satan.

Because that’s what it was. The Thoughts had me asking, “God, am I unworthy? Does my past unbelief permanently disqualify me from proclaiming the gospel? Am I kidding myself when I think that You have called me to this?”

When Jesus says that His sheep recognize His voice, He is right. When I thought about it, I could see that The Thoughts were not the voice of my shepherd.  Jesus doesn’t sow doubt and fear and shame.  Jesus would never say “You’re not good enough.  You can never be better than your worst sin.”

No, The Thoughts gave voice to one who only wanted to silence me, to make me believe that a transformed life was not possible.

I recognized in them the voice of Satan because, let’s face it, who else would want to keep the Gospel from being proclaimed?

Why, then, was it so easy, so natural, to entertain these thoughts? And entertain them I did. They rang the doorbell, and I showed them in.  I entertained them because they disguised themselves well, either masquerading as humility, or sneaking in on the coattails of my dear old friends self-doubt and despair.

I showed them to the most comfortable chair, and fed them so they could grow fat and happy. I made up the guest room with its breakfast tray and fresh flowers and invited them to stay as long as they liked, even if that meant there was no room at the inn for my shepherd and his unmistakeable voice.

I pride myself on being a good hostess. My greatest joy is house full of people, all talking at the same time, entering and exiting separate streams of conversations seamlessly, like some kind of conversational double-dutch. And food, lots of food. So the thought that I would ever refuse hospitality for any reason makes me shudder. And yet, I have learned that some guests should not be welcomed.

There are guests that are not coming to me for the warmth of my table or to share the blessings of my home.  Instead, they seek to “steal and kill and destroy” and I have let them. I have listened to them tell me I’m not enough or that I’m too much. I have been attentive to the whispers that insult and demean me, that steal my hope.

St. Paul knew what to do with such things.  This is what he tells the believers in Corinth:

“We demolish arguments and every pretension that sets itself up against the knowledge of God, and we take captive every thought to make it obedient to Christ.”

Now, when The Thoughts present themselves, I can say, “Oh, so it’s you again! Have you met my shepherd?  He’s in charge of who gets in and who doesn’t.” I’ve never thought of Jesus as a nightclub bouncer before, but that’s the image that keeps coming to mind:  my Savior working the velvet rope that guards my heart and my soul.  It makes me feel safe.  It makes me smile.