We remember him as the world’s worst brother and its first felon. Over the millennia, he has been portrayed as arrogant, deceitful, vengeful, stingy towards God and nothing less than the son of Satan. To me, he is a tragic figure, the star of a cautionary tale of what can happen when we offer what we have to God and He says, “No thank you.”

Cain was a farmer in a land East of Eden, where his parents had been exiled after The Fall. His work was hard and painful, but still produced enough that he could bring some of his crops to God as an offering. God looks favorably on his brother’s offering, but not his. He isn’t told why and neither are we.

We don’t like it, but sometimes God is like that. In His perfect freedom and sovereignty, God can act in ways we don’t understand, and He doesn’t explain.

And so Cain reacts as most of us would. He is angry at God and at his brother, God’s favorite. He is a bubbling stew of envy, resentment, shame at his own rejection and offense at his sense of fairness and justice. Unable or unwilling to turn down the heat — even after God cautions him — Cain lets it all boil over into murder. He is exiled, a marked man. Poor Cain.

Poor us. Cain is the spiritual ancestor no one wants to claim. His protest of “It’s not fair!” springs as easily from our lips as from his. Whenever someone else gets the blessing we think is ours, our envy can burn as hot as his did. (Joseph Epstein put it best: “Of all the deadly sins, only envy is no fun at all.”)

And sometimes, we know the pain and confusion Cain felt when God does not seem to want the gifts we are offering.

Hang around church long enough, and you’ll hear talk of identifying your spiritual gifts. There are spiritual gifts inventories, Myers Briggs tests and Enneagrams that are used to reveal our unique gifts and abilities. God will open doors for us to use those gifts, and He watches with great pleasure as we flourish and His kingdom grows. Frederick Buechner is often quoted to illustrate this:

“The place God calls you to is the place where your deep gladness and the world’s deep hunger meet.”

And yet, there are times when we arrive at those places, gifts in hand, and find the door shut.

Where once we found the Lord had regard for our offerings, where our gladness meshed perfectly with the world’s deep hunger, now the way is barred. Like Cain, we are left wondering why. Cain is the object lesson of what not to do in this situation. So, what do you do when God says, “No thank you”?

Do the opposite of what you feel

Feeling hopeless? Pray hope. Feeling angry and slighted? Pray thanks. Feeling envy? Pray blessing on the one you envy.  You probably won’t mean it (at least not at first), but that’s ok. Do it anyway. It is a powerful defense against the sin that “crouches at the door.”  I find the Psalms are perfect for this.  No matter how despondent, frustrated, angry, or baffled the Psalmist was, these prayers always contain praise and thanksgiving to God. They are reminders that for every time you feel abandoned, forgotten or rejected, there are 10 times that God has rescued, remembered and welcomed you.

Consider that God may be using “closed doors” to draw you to Him.

Cain is angry at God for overlooking his offering, but he sulks in silence. It is God who pursues him and wants to talk about it.

“God spoke to Cain: “Why this tantrum? Why the sulking? If you do well, won’t you be accepted? And if you don’t do well, sin is lying in wait for you, ready to pounce; it’s out to get you, you’ve got to master it.” (Genesis 4:6-7 The Message)

Knowing all the ugliness that lurks in Cain’s heart, it is possible God wants to bring it to the surface and show him how to deal with it. It is possible that God hopes in his pain, Cain will turn to Him. It could be that God wants Cain to recognize sin when he sees it, and having recognized it, resist it.

If you’re knocking and the doors aren’t opening, you could be in the wrong hallway.

Spiritual gifts inventories and personality tests are all well and good, but make no mistake: they don’t bind or constrain God. God could have something else in mind for you. Sometimes God invites us to places we feel we don’t belong, to a far country where the gifts and talents we use to define ourselves are a worthless currency, an offering that is unwelcome.

You may be happily using your gifts teaching Sunday School, but that doesn’t mean that God might not call you to pick up a hammer with Habitat for Humanity — even if you’re all thumbs. It may not make sense to now (or ever) but we have to be ready say, “I’m willing.”

Look beyond yourself
Maybe it’s not about you at all. As hard as it can be to imagine, God’s “rejection” of your offering it might not be about you at all. God’s ”no” to you could make “yes” to someone else possible.
In John Steinbeck’s East of Eden, the meaning of Cain’s story hangs on the translation of one word in verse 7 of Genesis: timshel. In most English translations, it is rendered must as in “Its (sin’s) desire is for you, but you must rule over it.” This is a command, and it can seem as if it is up to us to white-knuckle it and rely on our own strength and will. But timshel can also mean may, as in “you may rule over it,” which gives us a choice and a responsibility. To me, it also leaves room for the grace of God to help me to do what I can’t do on my own.

Sometimes we offer what we have to God and He says, “No thank you.” What we do next will lead us in the way of Cain — wandering in exile, far from God — or in the way of God’s sometimes surprising will for us. 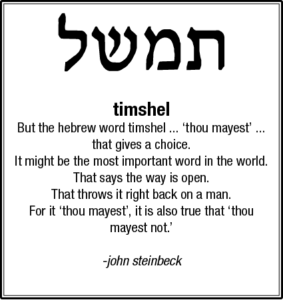